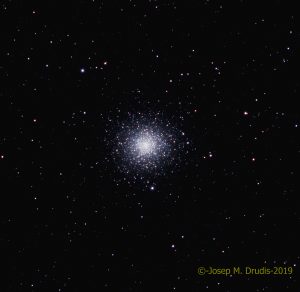 Messier 2 or NGC 7089, as it is catalogued in the New General Catalogue, is a large Globular Cluster in the constellation Aquarius. Despite being one of the largest clusters (175 light years across), its distance from us (37,500 light years) prevents us from getting a more detailed view. It contains more than 150,000 stars, has a magnitude of +6.3 and is 13 Billion years old. This cluster has some of the oldest stars in our Milky Way, which have a very low metallicity (elements heavier than Hydrogen and Helium). This makes it extremely unlikely that they have any Earth-like planet around them.

This cluster orbits the Milky Way through the halo region and moves towards us at 5.3 km/sec.