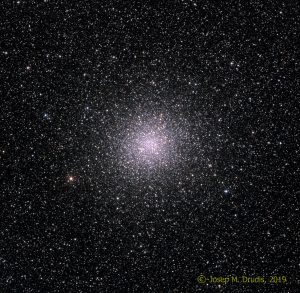 22 and NGC 6656, is a very bright globular cluster located in the constellation Sagittarius. It is seen against the densely packed starry background of the Milky Way. Angularly, it is close our Galaxy’s bulge and also its center.

This cluster, having a negative declination (-23º 54′), cannot be seen in its full splendor from Northern latitudes. Actually, it is the third brightest globular cluster as seen from Earth, only behind the Omega Centauri cluster and NGC 104 (47 Tuc cluster). Would it be at a higher declination, it would shade the great Hercules Cluster, M13 as well as M5 in Serpens. Like most globulars, it is an old (12 Billion years) cluster.

M22 has about 100,000 stars and a combined mass between 500,000-1,000,000 solar masses. It shows the usual characteristics of Globular Clusters. Additionally, it has two black holes (J. Strader et al. in 2012 even consider that 5-100 black holes may be lurking around in M22). These black holes appear to have stellar mass (10-20 solar masses) and may be part of binary systems and, therefore, accreting additional mass. M22 has also a planetary nebula, small (3 arcsec) and faint enough to not be visible in this detailed image.