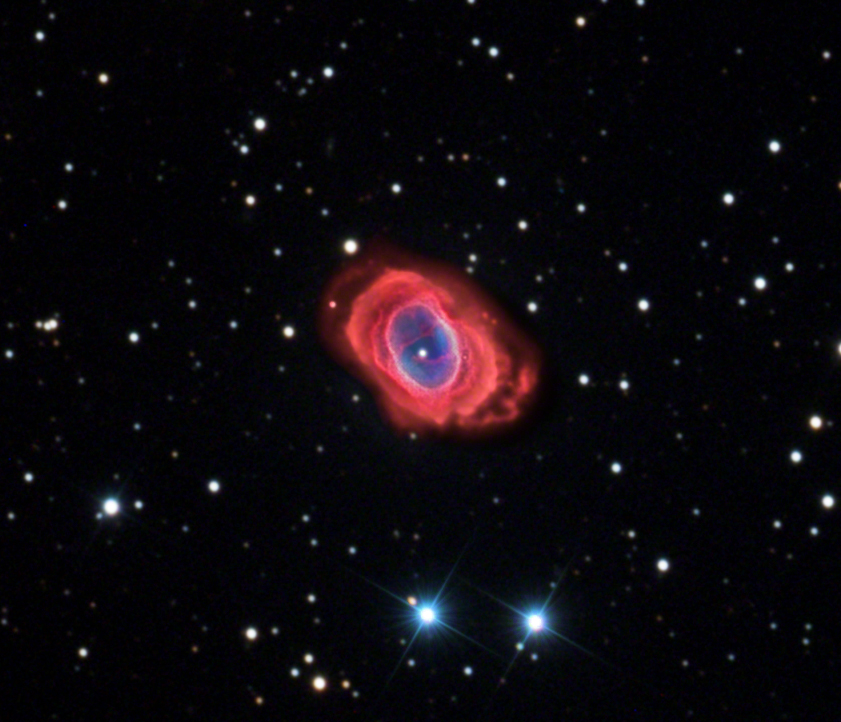 NGC 3132 is a planetary nebula located in the Southern constellation Vela. Although it is pretty close to our Solar System, about 2,000 light years, its small size (1 arcmin), makes it difficult to grab detail of its intricate structure.

The star located near its center, HD 87892, an A-type star, is not the star that created and fuels the gaseous halo that surrounds it. R. Mendez, in 1975, concluded that HD 87892 was at the same distance as NGC 3132 but that a second component (with properties typical of a white dwarf) had to be present. With this in mind, Kohoutek et al., in 1977, imaged the star with a 3.6 m telescope in La Silla, Chile. They got the image of the faint white dwarf they were expecting. Easily seen, now, in images taken by the HST, this star fulfills all predicted properties. This star is, for obvious reasons, not visible in this image.

The nebula itself has been extensively studied. A good example of this is the paper published by A. Monreal-Ibero et al., at the end of 2019.  They were using the MUSE (Multi Unit Spectroscopic Explorer) at the VLT (ESO, Chile) and one of the conclusions they reached was that this nebula has a spatial structure of a “diabolo“, meaning the double cup present in many planetaries (like the Bug Nebula, NGC 6302).

This image was taken with narrowband filters (5nm Halpha and 3nm OIII) as well as short RGB exposures in order to grab the stars in natural color.