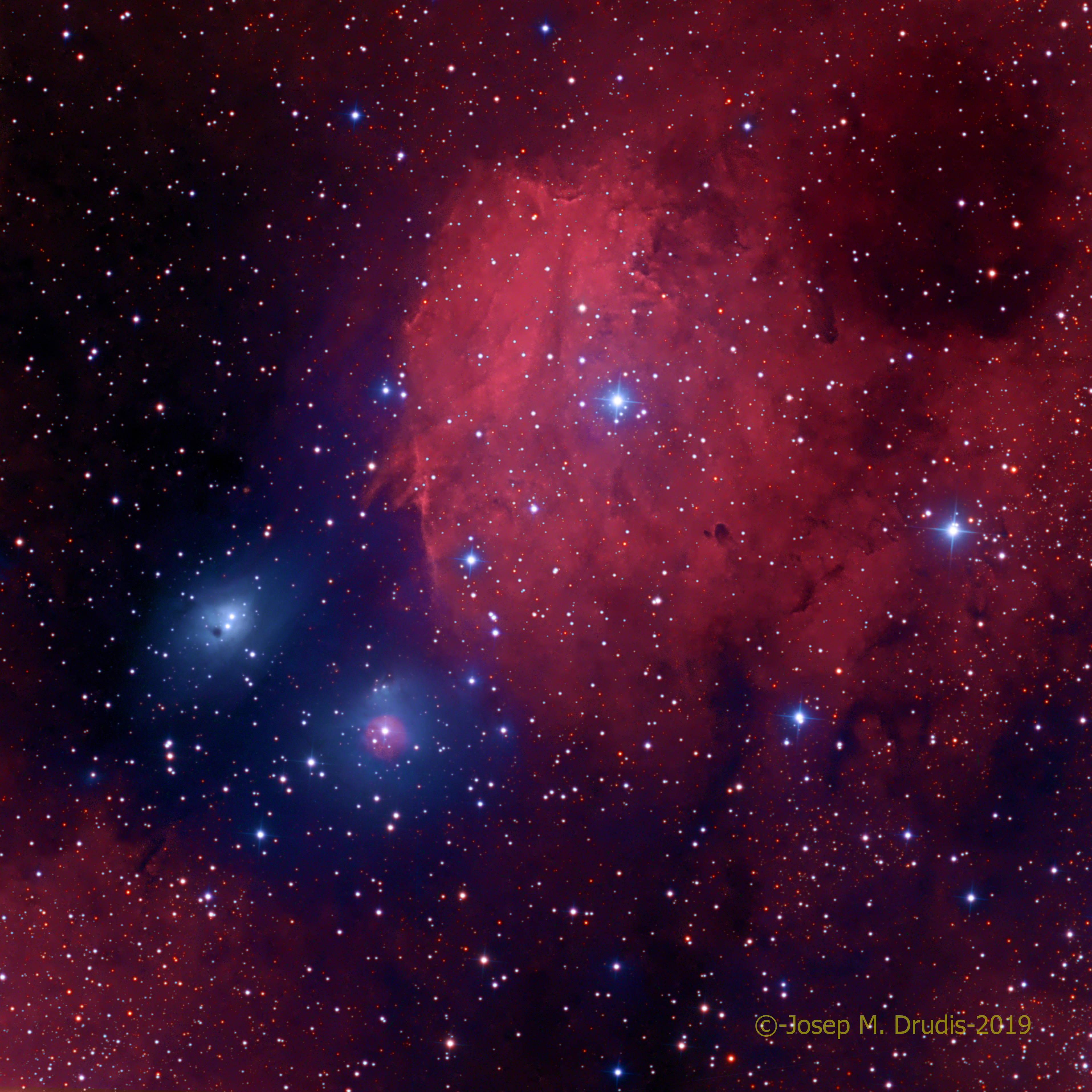 This image shows a star forming region in the constellation Sagittarius. At least four nebulae are present here (see annotated copy below): NGC 6595, on the center left, a beautiful reflection nebula, IC 1284 and IC 1283, on the right half of the image, two conspicuous, red HII regions and NGC 6589, on the lower center-left of the image, another reflection nebula. These nebulae are not very often imaged, sitting against the disk of the Milky Way and only 3 to 5 degrees away of other more popular targets like M8, M20, M17 and M22. This image, nevertheless, has two peculiarities, on one side, it clearly shows a Herbig Haro object (HH 180, see annotated version) and a red bubble inside NGC 6589. This bubble was unknown, not mentioned in the literature and not seen in the images found online. 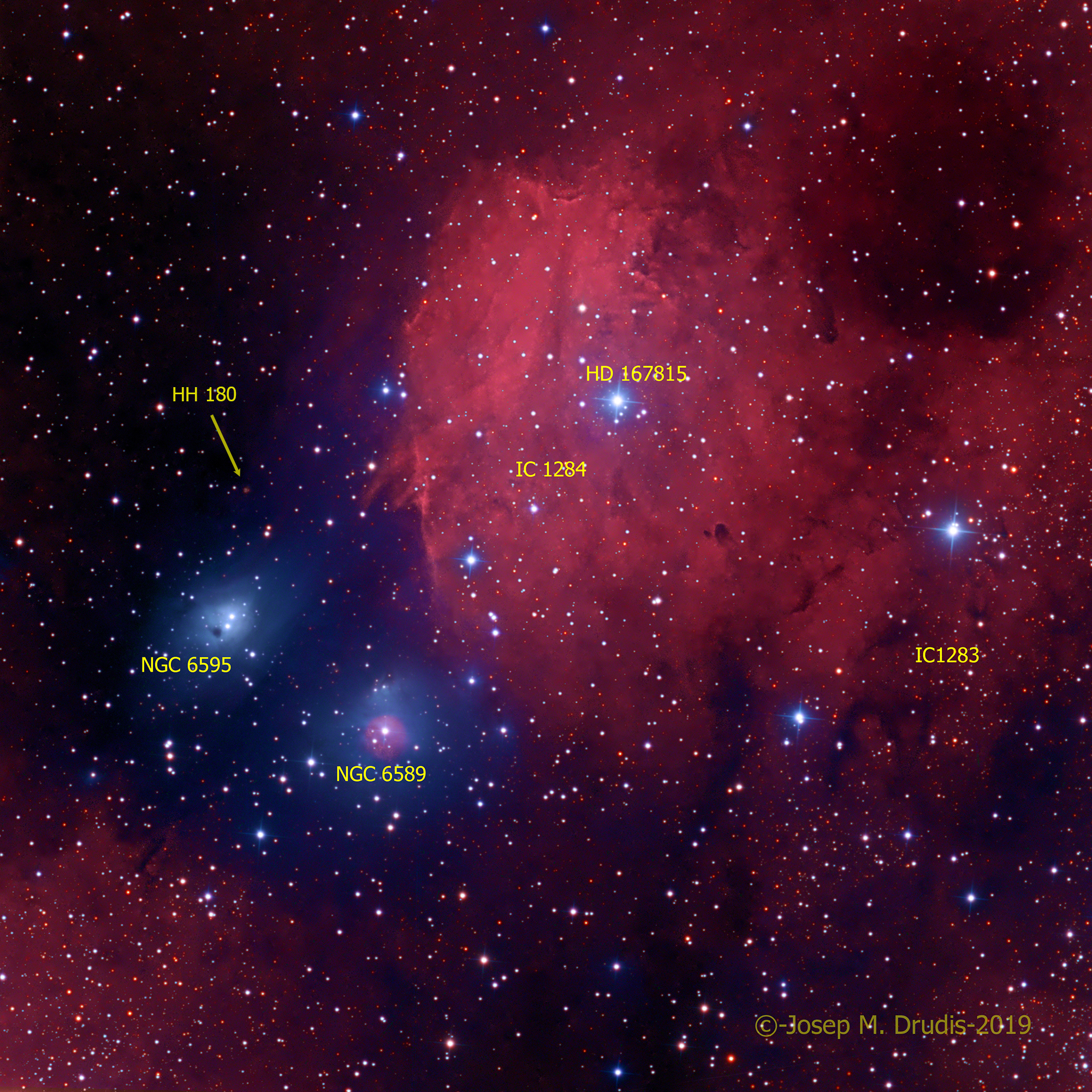 The usual images of reflection nebulae are taken nearly exclusively with the combination of broadband filters LRGB. In this case, and with the intention of obtaining a better contrast and resolution in IC 1284 and IC 1283, additional 3.5 hr of deep hydrogen alpha were taken with a long exposure time, 30 minutes each. In this case an, as yet, unknown and well-defined, 27” radius, bubble-like nebula appears inside of NGC 6589 and around its central star, HD 167638 (see Figures 1(a) and (c)). This signal only appears in the images taken with the hydrogen alpha filter and not in any of the broadband filters.

NGC 6589 is reflecting the light of its central star, HD 167638, a blue, type B2II massive star, with a magnitude of +10.11. Actually, according to Prof. Crowther (Univ. of Sheffield, UK), some blue supergiants do exhibit nebulae that are associated with ejected mass, that are bright in the mid infrared. As an example of this, Wachter et al. (2010), as well as Carey et al. (2009), report the discovery of multiple such nebulae, when analyzing images taken at midIR (3-22 µm). Specifically HD 167638 lacks any mid-IR signal, except for a faint emission, located 1 arcmin East of the star. This emission might be associated to the new nebulosity.

As it is usual with all discoveries, there is a need of confirmation images. As long as, when this nebula was discovered (during the late processing of images taken mid-April 2019), this nebula was not possible to be imaged again until April 2020 and therefore, the confirmation images were taken from a Hydrogen alpha Survey, the SuperCOSMOS H-alpha Survey. This discovery was reported and published as a Research Note of the Journal of the AAS, on 4 february 2020.

The image below, shows the four steps of this image: 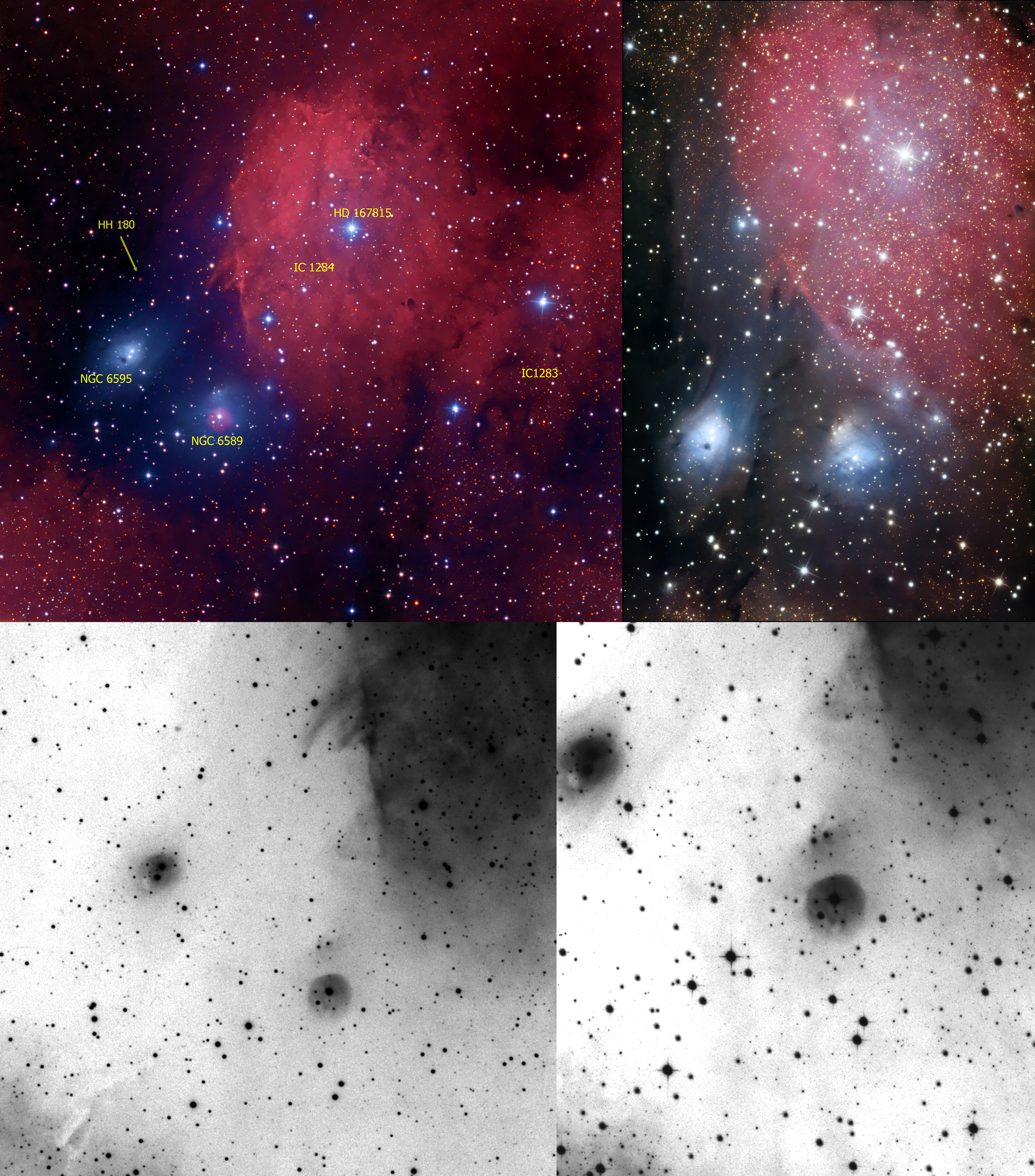