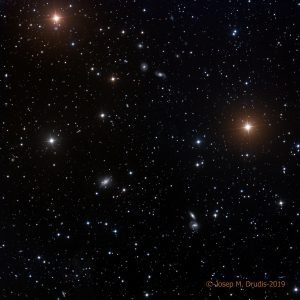 Click on the image for a full resolution image

ESO 510-G13, located just above center of the lower left quarter, is one of many galaxies in this image. This edge-on galaxy stands up, because it has a warped central dust disk. This can be due to different factors, but the most probable is a recent collision with another galaxy, that has been absorbed in ESO 510-G13. Another possibility that has been proposed has been some kind of interaction that is possible in barred spirals. The dynamics of these warped disks is not very precisely known, but at least, it is known that they are not static. They “rebound” several times, but friction reduces their amplitude until the warp fades away, leaving a “flat” dust disk, like in Messier 104. Given its distance to us, 150 Million light years, its redshift is measurable: z=0.011571 (Simbad Database).

Our galaxy has been recently mapped for a 3D distribution of Cepheid stars and this map shows that the Milky Way is also somewhat warped.

A cropped image of the warped galaxy, compared with the same image but taken with the Hubble Telescope is shown below. 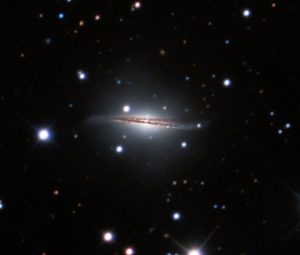 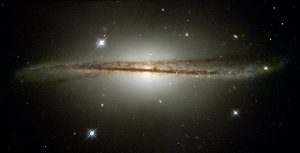