IC 2220 is usually known as the Toby Jug Nebula. This is, apparently, due to its resemblance to a specific kind of jugs, depicting characters. Nobody knows whether “Toby” had a special face shape that inspired the astronomers who named it…

IC 2220 is, strange as it may sound, a reflection nebula. There are very few known red-orange reflection nebulae, and they are always related to red giant stars. In this case, the star HR 3126 (HD 65750), a type M2II red giant, has a mass of about 5 solar masses and a magnitude of around 6.5 (it is a variable). Usually, reflection nebulae are blue, reflecting and dispersing the light from blue stars that had been formed in the surroundings. IC 2220 formed by mass ejection from HR 3126 and the mass of this bi-conical nebulosity has been calculated at 0.7 solar masses (J. E. Pesce et al. ESA, A Decade of UV Astronomy with the IUE Satellite, Volume 1 p 253-256 (1988)). The spectrum of IC 2220 shows that, following the usual feature of reflection nebulae, the reflected light is slightly bluer than the star’s original emitted light.

But there is something peculiar in this image: Apparently, the mass ejection from HR 3126, has occurred in at least two or three stages. This image shows two very faint bubbles: hints of some arcs of the first one are located about 7.5 arcmin to the East and West of HR 3126 (midway towards the upper left and lower right corners), as well as the second bubble located 5 arcmin to the West (towards the lower right corner) and around the main nebula. These arcs and bubble are not captured in normal LRGB images (being a reflection nebula, this is the normal choice of filters). The image above has been taken in LRGB, but also in Halpha, the only filter where these bubbles showed up.

The initial intention was to capture any potential faint red nebulosity in the background. Once this bubbles popped up in the initial Halpha master image (6x30min), I took up to 15 more 30 min subframes in order to get a deeper, less noisy, image. It was my daughter, Anna (10 years old), who was playing with the DDP tool in CCDStack with the Halpha master image, who first noticed it. I have then dubbed these bubbles: Anna’s Nebula. I have not yet found any earlier mention to these bubbles around IC 2220. I have found many excellent images of IC 2220 in the Internet, most of them better detailed and showing IC 2220’s structure much better than this one, but none of them (all of them taken in LRGB) shows the additional bubbles. I will keep on digging in the existing archives and, if I find anything, I will post the result here.

Update (2018-05-07): Three astrophotographers, Andrealuna Pizzetti, Tel Lekatsas and Christian Sasse have, independently, taken Ha pictures of this region, in order to try to confirm the existence of this bubbles. The integration of all their 19x600s images (see below), taken with another 20″ telescope, shows the same bubbles’ position and shape, confirming them.

See the faint arcs above and below the main nebula, as well as the “central” thicker, more circular shaped, nebulosity.

Update (2018-05-26): This discovery has been reported and published as a Research Note of the AAS (American Astronomical Society) on May 25.

Update (2018-10-03): Sakib Rasool has pointed out that the previously stated size of this newly discovered nebula was 21 arc minutes instead of 16, as it had been written. Double checking has shown him to be right (corrected below).

Update (2020-01-27): Rolf Wahl Olsen took a deeper image in order to better capture the bubble’s structure. He got a wonderful image that he is sharing here: 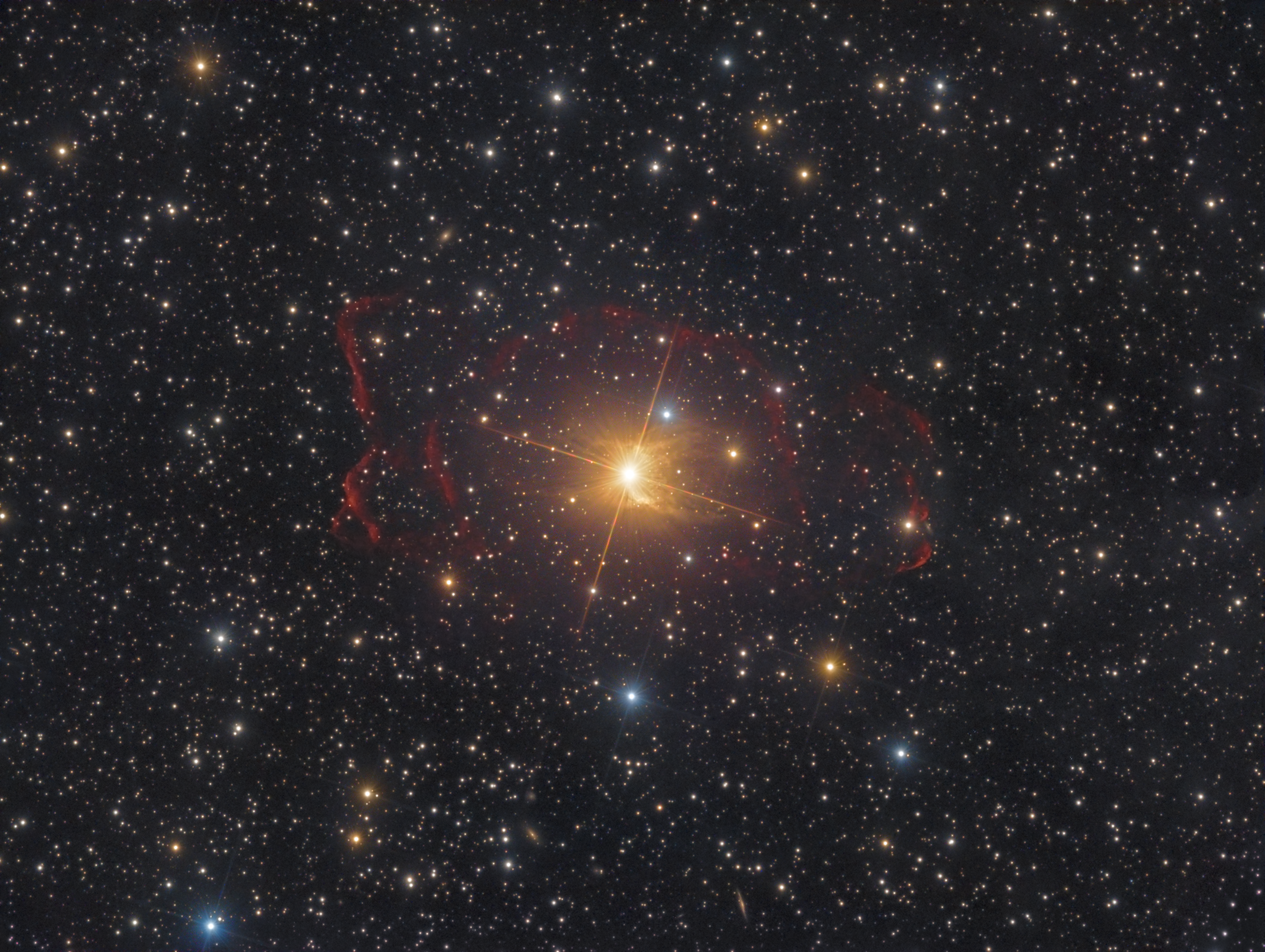 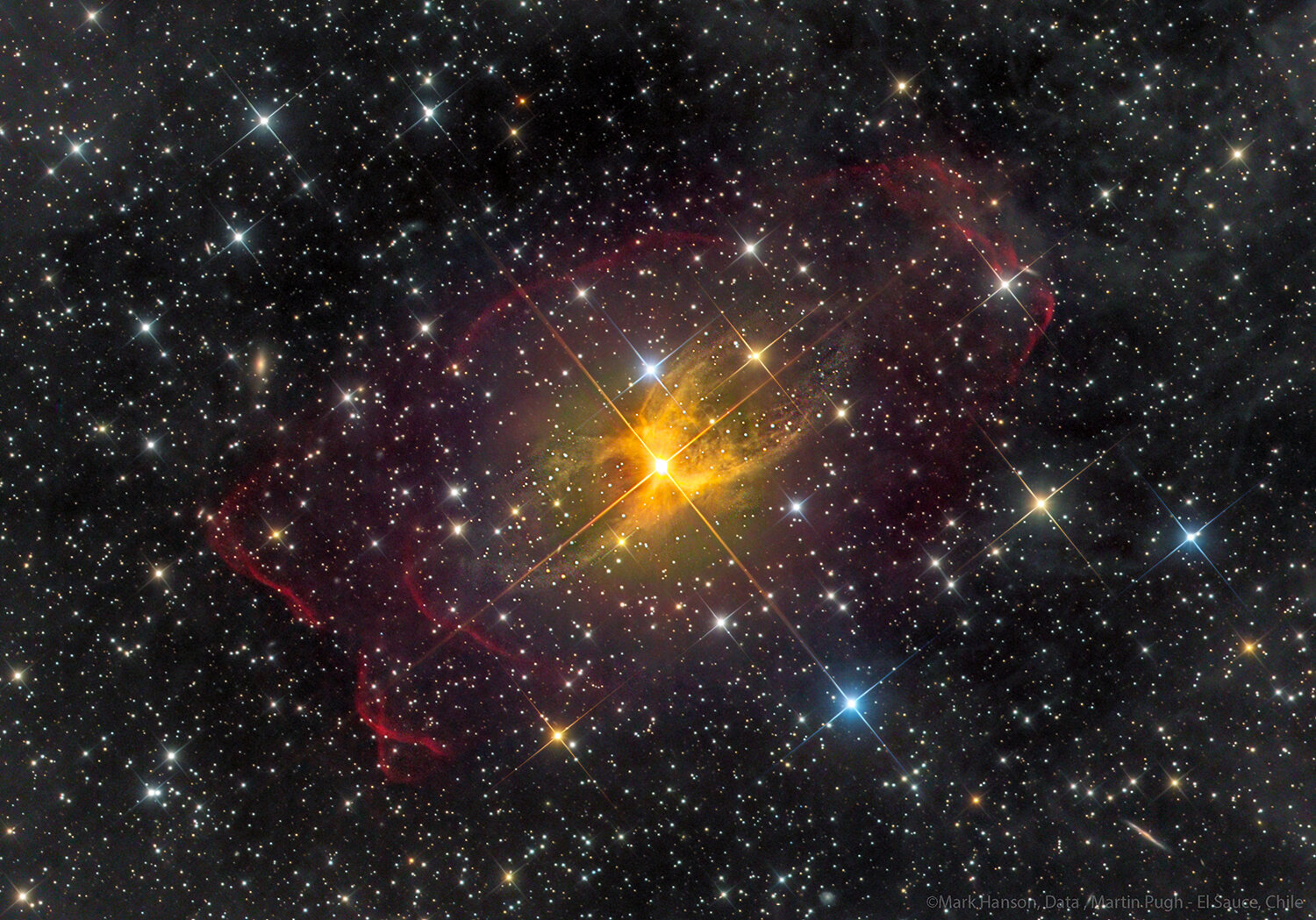