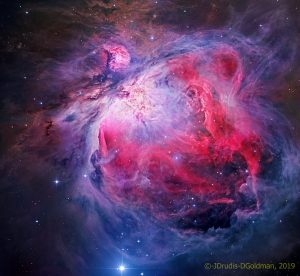 This image has been selected as Astronomy Picture Of the Day (APOD) on October 30, 2019.

Messier 42. A lot has been explored, studied, said, written and explained about this rich star forming region, enough to fill up dozens of thick books. This is why, in this page, I will not talk much about emission lines, proplyds, dark dust clouds, IFNs, young stars, massive stars, and so on and on… There is a good full description at messier-objects.com. This image depicts M42 as well as M43, also known as the De Mairan Nebula, the “warped tear”-shaped nebula on top of the large M42.

This time, the image and its story is in the center of attention. This image is the result of yet another (and we have still many to go…) joint project with Don Goldman. It is a 2×2 mosaic taken with his 20” inch telescope located at the SSO, Australia. As long as this is, by far, the most difficult object that I have ever processed, the image has been taken in a non-simple-and-plain way. First of all, the object’s brightness varies extremely from the center (considering the Trapezium region as the center), which you can show its structure only with very short exposures (30 and 60seconds for narrowband filters) to the surrounding dust clouds, only attainable with several (combined) hours of exposure with 30 minute subframes. The whole range of exposures has been: 30, 60, 600, 900 and 1800 seconds, for a total combined exposure time of 65.9 hours over two consecutive seasons. The narrowband filters used have been Halpha and OIII.

The processing involved Don’s and my attention for more than 300 hours combined. These hours include several “start-all-over-again” and frustrating undo-redo processing steps. In the end, each one of us was working different parts of the process in order to get a common final image. But, nearly at the end of the process, we reached somewhat different approaches and final versions. We then decided to have each one his own version. The one in this site is mine and his can be found here. As Luminance, what we used is a mix between a synthetic Luminance created with 600s RGB, the 900s Blue (partially, only the reflection nebula region) and the 30 min narrowband images. The color was created by mapping Halpha to Red and 15% Blue, OIII to Green and Blue, as well as the 600s RGB and the 900s Blue (to better display the reflection nebulosities) to their natural colors. The processing was finally achieved with CCDStack (to create the individual panel masters per filter and exposure time), Registar to “sew” the mosaics and Photoshop CC 2019 for the post-processing. All attempts to use other (well known) processing programs failed to provide satisfactory results.

Using one of my friend’s words about taking and processing M42, “I know that this target is a real pain… but I did it and I intend to never do this again”. Now I understand him, my intention is to leave it as it is now too…