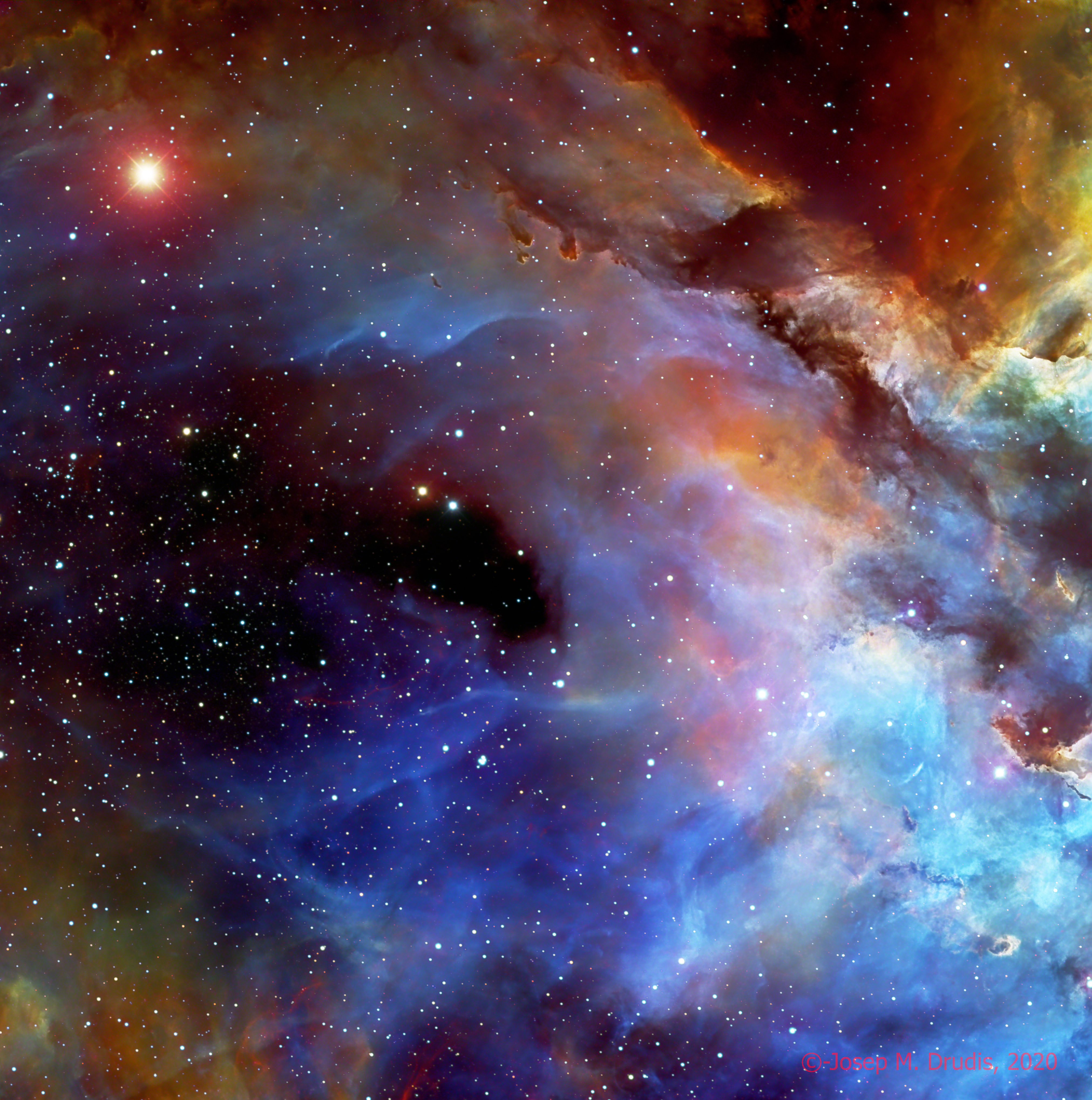 Click on the image for a full resolution version
NGC 3372, better known and referred to as the Eta Carina Nebula, is one of the most iconic objects in the Southern Hemisphere (if not of the whole sky). The star Eta carina itself (class B0), located in the center of the nebula, is a giant variable blue star (6.2-11.1) and is surrounded by the Homunculus Nebula (too small to be imaged except for the large telescopes, I captured an image of it with the CDK 20″ that can be found here). NGC 3372 is a bright (visible with the naked eye) and very large nebula. It is one of the largest HII regions in the Milky Way and four times as large as the better known Orion Nebula (M42). A wide field of NGC 3372 can be found here and other fragments of it here and here.
This fragment (South is to the upper left) is located about half a degree directly South of the bright star that gives its name to the whole nebula (Eta Carina). The image was taken with narrowband filters (Ha, OIII and SII) and mapped to the Hubble Color Palette (Ha: Green, OIII: Blue, SII: Red). Even if it seems impossible, there has not been any modification to the initial color and this very wide palette with numerous nuances is only due to the distribution of the emitting gases. Hydrogen gas is abundant on the left half of the image. Oxygen prevails on the lower half and SII’s region is the upper half (and center), with delicate red wisps close to the lower border. The mix of Oxygen and Hydrogen in the lower quarter provides the teal and turquoise shades.
Additional Information
Object
Name(s): NGC 3372. Caldwell 92. Eta Carinae Nebula
Type: Emission Nebula
RA:  10h 43m 37s
Dec: -60º 15’ 34”
Constellation: Carina
Size (arcmin): 120×120 arcmin
Magnitude: +1
Distance: 10,000 ly
Image
Date: 2020-05-07 to 2020-05-15
Location: iTelescope.net, SSO near Coonabarabran, NSW Australia
Size (arcmin): 37×37 arcmin
Telescope: 20” f/6.8 Reflector
Camera: SBIG STX16803 (4096x4096pix)
Guiding: Astrodon MonsterMOAG off-axis guider
Total exposure: 22.5 hours (Ha: 8.5 h; OIII: 7.5 h; SII: 5 h; RGB: 1.5 h)
Processing: CCDStack, Photoshop CC 2020