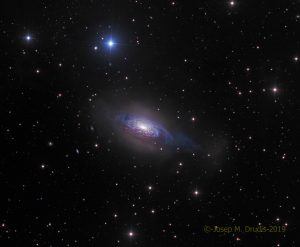 NGC 3521 is a “flocculent” spiral galaxy located 35 million light-years away, in the Constellation Leo. Its declination (-0º 2′) allows for this beautiful galaxy to be imaged from both Hemispheres. The term “flocculent” means that this galaxy has huge amounts of dust among the stars and it concentrates in short filaments that seem to emerge from the disk. Other examples of this kind of galaxies are NGC 253  or NGC 4945.

This galaxy reveals part of its past encounters (and mergers) with other galaxies, by means of its outer bubble-like shells (and hence its popular name). These shells, star streams that still remain surrounding their current “parent”, belonged once to smaller galaxies that collided with NGC 3521.