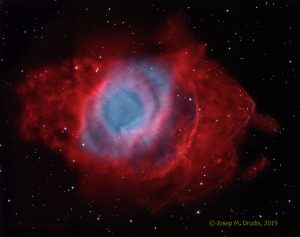 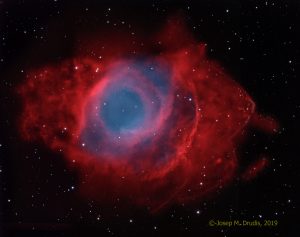 This is not the first time that I visit (photographically speaking…) this nebula. It might be the last one though… Please, see the previous one here.

The helix nebula is the closest planetary nebula to our backyard. This makes it a perfect (or at least, the best) research laboratory for this kind of objects. In this case, O’Dell et al. published, in 2004 a crucial paper describing the nebula’s very complex structure.

The classical nebula (O’Dell calls it the “Main Ring”) contains two distinct regions: the central “circle”, containing the white dwarf whose parent star originated the nebula, is very rich in OIII emission, presenting a “spiked” structure that  is very apparent. O’Dell counts up to 108 such “Radial Rays”. The second notable region is the red, hydrogen-rich annular structure. This region, visible through the filters Ha, NII and SII, and shows a great deal of so called “knots”.

An additional structure is the far fainter outer “halo” structure, with two plumes, several “outer features”, the so called Meaburn jet as well as different objects (see Annotated Image 1). Actually, the outer structure shows to be richer, with very faint (but visible) arcs and structures farther away from the center. One special case is the Eastern Bow-shock (here labeled Bowshock 1) visible in the annotated image (yellow letters). The Bowshock 2, as well as the fainter structures labeled “A” and “B” have appeared in some deep images of NGC 7293, mainly taken with professional equipment, but I did not find any detailed description of them. 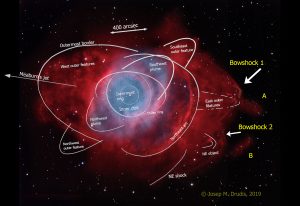 But the nebula’s structure is still way more complex. Adding to O’Dell’s described structure, Zhang et al. described in 2012 an as then undiscovered external halo, only visible in Infra-red, describing an arc on the Northern region of the nebula.

Meaburn at al. described, with lots of details, the Eastern Bow-shock in 2013. This feature is formed when the expanding nebula collides with the InterStellar Medium (ISM).

In order to grab all these features, a 2 panel mosaic was taken, emphasizing the Hydrogen alpha emission lines. A total of 51.5 hours of narrowband (Ha and OIII) images were taken, out of which 41.5 hours were for Ha (31.5 of these were taken with binning 2×2 in order to better grab the faintest structures). Two versions of this image have been finished. The first one shows the nebula according to the natural intensities of its emission lines. The second one emphasizes the OIII emission, with its distinctive “spiked” structure. South is up.

Annotated Image 1. Annotations based on the work published in: O’Dell et al., 2004