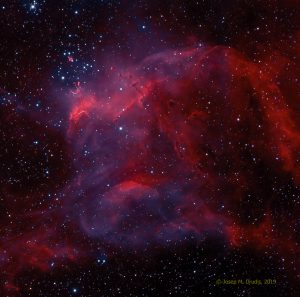 This image has been selected as Astronomy Picture of the Day (APOD) on November 8, 2019.

The area of this beautiful HII region lies three degrees East of NGC 3372, the Eta Carinae Nebula and one degree North of NGC 3576, the Statue of Liberty Nebula. Specifically, the fact that this nebula is so close to these well known targets, makes it nearly completely neglected. It was catalogued by Colin Gum with the name Gum 37 and it also appears in professional catalogs (GAL 290.65+00.26). In this image (see the annotated version below), besides the main nebulosity, an open cluster, NGC 3572, and, inside it, a very small “blob” (21.5 x 16 arcsec) also claim for their place here. The “blob” was initially catalogued as a planetary nebula (PN G290.7+00.2; even as recently as July 2018, JA Molina et al. mention this as a planetary nebula and state that it “has not been studied in detail”) but it has been now more accurately considered a Photo-evaporating Globule and assigned the name PhJa 1. No more descriptions of this nebula have been found.

Some additional pillars (dark nebulosities, that may be the cradle where new stars may be born) show up in the upper left quarter. Amazingly enough, two of them remind us of the Tadpoles (located in the Northern Hemisphere) and I have called the “Southern Tadpoles”. One of them (Tadpole 1) has a catalogued name: WRAY 15-764. I haven’t found any name for the “Tadpole 2”.

I want to thank Sakib Rasool for the correct identification of Gum 37 as well as the Photo-evaporating Globule PhJa 1. 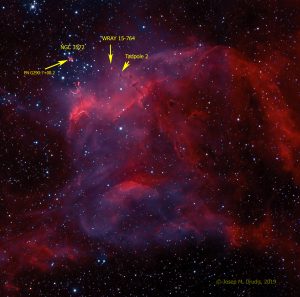